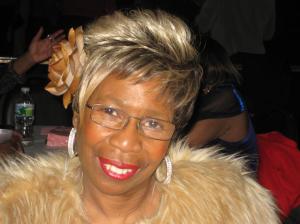 Singer Louie Murray of The Hearts and the Jaynetts joins guest host Bobby G when he fills in for Alan Seltzer Thursday night at 9 PM on “The Grooveyard”.  A pioneer member of R&B girl groups from the early 1950s, Louise’s vocals on “Lonely Nights” was a top seller in New York when it was released in 1955.  She had an even bigger hit when “Sally Go ‘Round the Roses” was recorded by the Jaynetts in 1963.  The Top Ten @ 10 will feature the hits of December 4, 1961.

About a week remains to vote in the final round of the third annual Grooveyard Great 88 survey.  You can vote daily fr your 10 favorites in three final round surveys, for songs from 1957 and earlier, 1958-1960 and 1961-1963. We’ll count down the results during a five-hour edition of “The Grooveyard” at a special day and time–Friday, December 26 at 7 PM.  (We’re taking Christmas night off.)  You can also check out first round results here.  Final round updates will be available by following us on on Twitter.