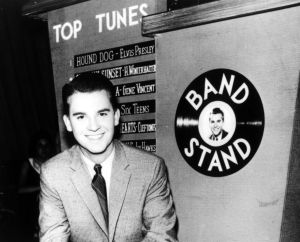 Two iconic musical anniversaries will be celebrated this week on “The Grooveyard” and “Saturday Soiree”.

Thursday night at 9 PM on “The Grooveyard”, Alan Seltzer honors the anniversary of Dick Clark beginning host duties on the show that became “American Bandstand” by playing music by artists that performed on the show.  On July 9. 1956, Clark replaced Bob Horn on a local dance show on WFIL in Philadelphia called “Bandstand” after the original host was charged with DUI.  The Top Ten @ 10 will feature the hits of July 9, 1962.

On the “Saturday Soiree”, host Bobby G looks back at the premiere of “A Hard Days Night” 51 years ago by playing the soundtrack and bonus tracks.  The Soiree Survey features the charted songs from July 11 1965.