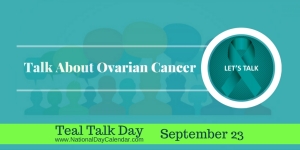 “The Grooveyard” celebrates Talk About Teal Day for Ovarian Cancer by featuring color songs this Saturday night at 7 PM.

The day is observed each year to encourage women to talk about Ovarian Cancer.  Over 249,000 women are diagnosed annually with ovarian cancer, worldwide.  Due to a lack of “teal” songs, host Alan Seltzer will offer a six-pack of blue songs–including an Under the Covers segment–to encourage the discussion.  The Grooveyard Top Ten will feature the hits of September 23, 1957.  We’ll also play more of your favorites and take requests during the Grooveyard Party Hour.

Voting continues in our sixth annual Grooveyard Great 88 listener survey.  Polls for your 10 favorite songs from 1963 and  1955 and earlier were both extended one week due to Alan Seltzer’s injury last week.  Also, the poll for the best songs from 1957 opened this weekend.  You can also find the results of earlier surveys in the Great 88 section.

Listen to “The Grooveyard” following “Rick’s Redneck Ranch” each Saturday night at 7 PM on 88.1 FM on Long Island or by clicking the 88.1 FM link on wcwp.org or via the TuneIn app.   You can also follow us on Twitter.

Music at the Antiques Market

What Grinds My Gears: Don’t Tell Me What Not To Say