Here’s the Grooveyard Top Ten for February 23, 1960 as played tonight by Alan Seltzer on “The Grooveyard”:

“Where or When“ by Dion and the Belmonts

“What in the World’s Come Over You“ by Jack Scott 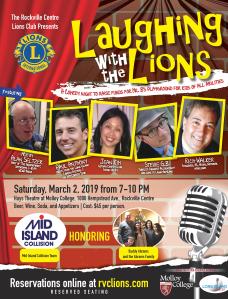 Get your tickets now!

“He’ll Have to Go” by Jim Reeves

“Wild One” by Bobby Rydell

“Beyond the Sea” by Bobby Darin

Tickets are almost sold out for “Laughing With the Lions”, a benefit next Saturday to raise funds to build a playground for kids of all abilities.  Alan Seltzer, the host of “The Grooveyard” will MC the show, taking place March 2nd at Hays Theatre at Molloy College.  The show features Paul Anthony (Long Island Comedy Festival), Jean Kim, (Gotham Comedy Club and Stand Up New York, Stevie G.B. (the world’s funniest accountant) and Rich Walker (Atlantic City, Las Vegas, Foxwoods).  Get your tickets here, and find out more about the plans for the playground here.

We have the Greatest Hits and Forgotten Favorites on . . .