Every collector knows what ephemera is, but just in case you don’t, ephemera are any items made from paper. Many of these items were meant to be looked at for a short period of time and thrown away, such as newspapers, flyers or advertisements.

Print ads are super popular for retro collectors. Let’s face it, 1950’s ads are funny! It’s also very interesting to have a look into what the world was like back then. And there’s no shortage of variety. There were a million ads printed up in the good ole days for things like cars, sweets, liquor, clothes, household items and European vacations. The 1950’s might have been a simpler time, but the advertising world was in full force and more than ever pushing its products on a prosperous middle America.

If you are interested in collecting ads from back in the day, I suggest you start looking by looking for a certain theme. That is, if you’re feeling overwhelmed. Otherwise, you can just browse and see what grabs your interest. I tend to do a little of both. I love anything that has cats in it, so I might be looking for ads with cats. I also love 50’s car ads. Or, I might just be surfing around to see what’s amusing or very particular to the era.

Here is my favorite ad from the 50’s, which I purchased on eBay which features both cars and a cat. It’s for the “new” V-8 engine in the 1957 Chevy Bel Air and Coupe. It says “Chevy puts the PURRR in performance!” and features a father and son picturing a cat when they listen to the engine. The mother of the family is at the drivers seat of a bright red Chevy, applying her lipstick, of course.

TIP: I hung this ad on my closet door with two-sided tape. DO NOT DO THIS! What ended up happening, is the tape somehow soaked through the paper and now it’s stained in four corners. I really should have framed this and hung it, or at least put a protective sleeve on it. Never put tape directly on your old paper goods!

Magazines are fantastic portals into the past. The 1950’s had some great magazines, including some of the ones we still have today such as Sunset, Better Homes and Gardens and TIME. Of course you can read the articles, which are a wealth of information when you want to see what was going on in the world back then… But honestly, to me the greatest thing about magazines from that era is that they are chock full of advertisements!

It’s like, duh, of course magazines would have a lot of ads. But until recently, it never occurred to me to purchase a whole magazine. Usually I just comb ole eBay for vintage advertisements. That changed when I recently went to an estate sale where I wasn’t having much luck… Then on a table in one of the back bedrooms I saw 3 old issues of TIME Magazine. Two were from the late 1960’s, but one was from the week of June 14, 1954! Wow.  I bought it for $2, really not expecting much, but when I got home and opened it up I was overwhelmed: The Ads! There are tons of them, right there at my fingertips and they are gorgeous! It was like taking a trip into the past. I decided then and there I’d pick up any magazines from the 1950’s from any estate sales or Flea Markets from now on! 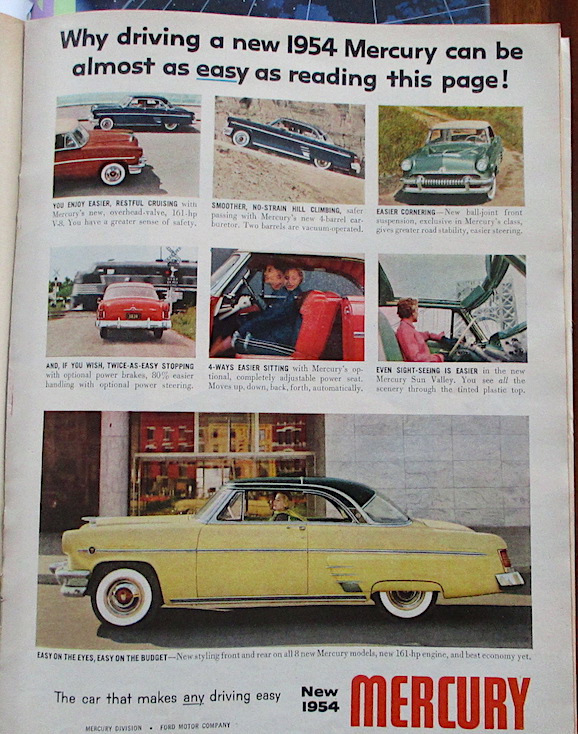 And being a retro-50’s music fanatic, here’s the ad I found most interesting from that issue of TIME:

Golly, that ad came out just as Rock n Roll was beginning to surface! In fact, the date of the magazine this ad was shown in, is just TWO DAYS after Bill Haley and The Comets recorded the song “Rock Around The Clock” at Decca Records on April 12, 1954. The best was yet to come!

Last summer I was at our local 40 and 8 Veteran’s Flea Market when I found two booklets from the 1950’s. One was a the National Presto Cooker Company Recipe book printed in Eau Claire, WI. The other was a book about coffee which also contained several recipes. (I also found a cute little recipe booklet by Jell-O on eBay for $2.) At first glance, these booklets are not the most exciting things in the world, and frankly they remind me of something Bert on Sesame Street might collect… BUT! In acquiring these little gems, you’re not only getting recipes of the day, in some cases, you’re getting really cute pictures that give you an additional insight to the sheer charm of the Fabulous Fifties.

I’m not even sure how I came across this little yellowed booklet:  “Texas Driving Handbook”. I found it on etsy while searching for something to add to my 50’s collections. It’s from the year 1952 (coincidentally the year Buddy Holly turned 16) and, as if that weren’t coincidental enough, the name on the top of the pamphlet is “Doc Brown” which I found amusing since that was the name of the crazy scientist who created the time machine in Back To The Future.

But I digress. This booklet is pretty nifty. I dig that it’s from Texas and I like how it says: “Please Return: Your thoughtfulness in returning this booklet will help someone else.”  The Fifties were all about common courtesy, do unto others and all that great jazz. In later decades, on a booklet such as this, we might see something like: “Failure to return this booklet is a violation of applicable law and may result in a fine…” or something.

There is even a poem on the inside cover called “Courtesy” by Edgar A. Guest. In the poem it says to “display manners that gentlefolk display” and implores that you to control your temper when someone beeps their horn at you. Imagine, a simple poem being the answer to Road Rage! Welcome to Pleasantville!

Anyway, the pictures inside are drawings, but it’s funny how all the cars appear so old from our modern-day point of view. Then there’s the accident statistics for 1951 (2,546 deaths) Regarding future statistics for 1952, it says: “THIS year depends on YOU.”

So, as you might imagine, here’s no telling how many old booklets and pamphlets on various subjects there are out there in garages, attics, sheds, and of course, on etsy and eBay. So if you want something unique, you should think about having a look at these things (which I previously never gave any attention to) You might find something that resonates with you as well as gives you even more insight into the past.

Those small advertising calendars are a great example of ephemera from the old days. Of course, if you’re male you’re probably most interested in the Pin Up girls. 😉But whether they have hot girls on them or not, calendars will ALWAYS have the date! That’s what makes them so intriguing. Something about looking up the date on an actual calendar from way back when always gives me the chills.

The first page is yellowed and dotted with some light staining. It’s never been torn off. And when you flip the page to February, it’s clean and pure white… 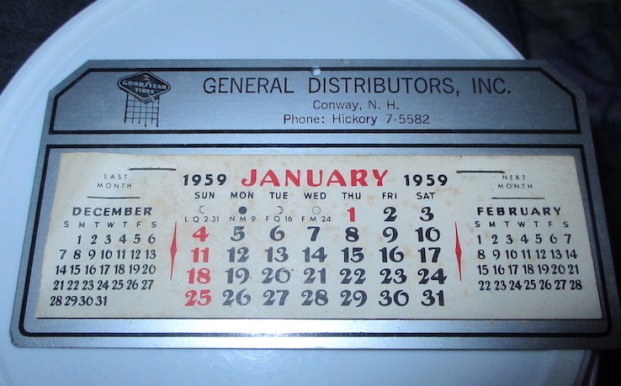 And there it is. Tuesday, February 3, 1959. Chilling. If only we could go back and change history…

Anyhow, these calendars were given away as free advertising by many businesses, and go back as far as the 1930’s! They make great collectibles and are usually quite affordable.

Then, of course, you have your good ole postcards, which are probably one of the most popular forms of collectible ephemera. They are interesting, available for practically every town in the world and relatively inexpensive to collect. As a bonus, some are written on and can give you a snippet of the past when you read what the sender has wrote home about.

My favorite thing about postcards from the 50’s are seeing the towns as they were at the time and the classic cars in the photos:

So there you have 6 examples of paper goods you can acquire from the Nifty Fifties (or whatever era you choose).

As a final roundup for this post, I want to remind you that although collecting ephemera is fun, exciting and often economical, it’s important that you store your treasures in a safe, dry place away from curious pets and little hands. Items from the 1950’s are often already yellowed and very delicate (they’re over 60 years old, for gosh sakes!) They will tear easily and just looking at them can cause them to fall apart! Do not attempt to put tape on anything paper and if you hang something, or put it in an album, make sure to use acid free paper.

Sometimes even finding anything paper from that time in decent condition is difficult to do in the first place. But while hunting, be patient, have fun looking and take good care of your items when you find them. They are, after all, a piece of history!

One thought on “Collecting 1950’s: 6 Types of Ephemera You Can Collect!”