Hello I’m Retro Dee and Welcome to another edition of Fifties Fashion Fix!

With Peggy Sue’s Cruise Santa Rosa coming up, I find myself obsessing on what to wear for the event. It’s actually harder than it sounds. Thus, I’ve become inspired to write about the things to avoid when dressing 1950s. Before I continue, please remember that none of my blog entries are meant to be “Rule Books”.  I believe that everyone has the right to express herself (or himself) by dressing however they choose. That said, my goal here is to educate folks on what was and was not authentic during that time period.

My first fashion blogs on this site talk about “How to dress 1950’s without looking like you’re going to a costume party”. I’m assuming that retro-loving gals in the 21st Century would like to do this. (Unless, of course, you are going to a costume party, then anything goes.) Still, no matter how “authentic” you try to be, the truth is, you can never dress  100% 1950’s-era style in today’s world and not look like you’re (at the very least) in some kind of theater production.

When I dress, the goal for myself is to strike a “happy medium” in which my look is definitely “1950’s Retro”, but doesn’t look too silly. Sometimes I feel I’ve succeeded, and other times, not so much.

Next thing to consider is your age. For example, I love the classic poodle skirt look, but on someone over 30, it’s going to very definitely look like a costume. My taste tends to be a little too “Fairy Tale Romantic” for my own good, and I find myself either veering towards the Sock Hop or Prom Night 1958. These looks need to be modified for the more mature lady in order to avoid looking like a complete idiot. I would say that if you have a young face you can go for the “Teenage Dream” look up to maybe your late 20’s. But Dear God, I suggest you avoid it if you don’t get carded anymore.

This is not to say that if you’re older you need to dress like Harriet Nelson. A cute, casual dress or a full skirt with a pretty pattern would work great. Also there are plenty of formal, glamorous dresses that don’t scream “Prom Night”. (Think Elizabeth Taylor or the “Mad Men” look.)

This third point will probably have a lot of obvious suggestions, but I’m going to list them anyway. I think that most gals (and guys) who love Retro know how to stay within the 50’s era. But sometimes, I wonder. For example, I saw one of those wide hairbands listed at auction as “Retro 1950’s”. It was being modeled by a gal with the classic, bouffant “Flip Do” and heavy bangs which could not be more 1960’s! I also see dresses with bright, floral patterns falling above knee-length being advertised as “50’s”. The 50’s and 60’s were not the same decade by a long shot. Yes, maybe the very first two or three years of the 1960’s were rather similar to the decade before, but after that? Total revolution! Everything changed. If you’re going somewhere specifically 1950’s themed, you might want to reconsider dressing like Marlo Thomas or Martha and The Vandellas.

Another thing I’d like to mention, is don’t just grab any old thing with polka dots on it and call it 50’s. Polka dots were undeniably popular in the 1950’s, but they are also classic. That means they can conceivably be from any era, from the 1940’s on. Just because an article of clothing has polka dots on it, doesn’t necessarily mean it’s 1950’s. I find that a lot of the “80’s does 50’s” dresses offered on today’s vintage market look more like “80’s does 80’s” dresses. By that I mean they have 80’s elements to them that are by now so classic, they look like exactly what they are: Vintage 80’s. Puffed sleeves, popped collars and a color block waist in lieu of a belt all identify the 80’s. Wide belts on collared shirt dresses were also 1980’s, and can sometimes be identified by the shirt pockets and the not-as-full skirt. The shirt dress is now a classic 80’s look because this style of dress returned to the fashion arena in the 80’s as a thirty-year throw back to the 50’s. But even so, there is a noticeable difference from the originals from the 50’s and the ones that came later. If you pay attention to detail, many times garments tell their true era. I’ll have more on this in a later entry.

“Skater” dresses and skirts are not 1950’s. They are 1990’s. Everyone knows that, except for some reason they show up on 50’s era Retro clothing sites. They don’t even really have the right look. If nothing else, they are way too short to look Retro 1950’s no matter what the company selling them tries to make you think. “Fit and Flare” does NOT necessarily mean 50’s. If the dress goes above your knee, it’s not 1950’s.

That brings me to my next point. The Pin-Up look. More popularly known today as the “Rockabilly” look.  If you like this look and you enjoy dressing that way, that’s fine. But so-called “Rockabilly” clothing is actually a subculture that developed during the late 1990’s. It was more or less based on the Pin-Up look of Bettie Page and the current day tattoo and piercing trends. It’s not 1950’s. It never was. Skulls and tattoos were used by sailors in the Navy: MEN, not women. The last thing any lady would consider or want in the 50’s was a tattoo. Heck most men would never consider a tattoo in those days. Please note that I am NOT condemning tattoos– I am merely saying that they were not a common part of society for men and women until the 90’s.

(As an addendum, I’d like to say that in the 50’s, they didn’t even pierce their ears!Earrings were the clip-on kind until the piercing of the earlobes caught on in the late 60’s!)

Any dress with skulls on it does not qualify as 1950’s. Even the so-called “naughty” gals of the day did not wear anything with skulls, krakens, zombies etc… on them. Actual retro 1950’s Pin-Up gals were usually innocent-looking, as in “The Farmer’s Daughter” look. Ellie May Clampett comes to mind.

Bettie Page’s edgy look has become a sub-culture of it’s own. Like Bettie herself once said “I was never the girl next door!” Bettie Page was an underground rebel. But in more popular society, the 1950’s were all about the girl next door. If you’re wanting to do a “sexy” 1950’s look, I suggest copying the ever-popular Marilyn Monroe. But do remember that the amount of cleavage she showed in her films was not considered “appropriate” in most mainstream social circles, nor were the extra tight pencil skirts she wore.

The list below will give you a quick reference to what to avoid when you really want to do the 1950’s look without looking like a walking cliché or something that came out of Hot Topic.

Well folks, I hope this helps to give you an idea of what to avoid if you want to dress authentic 1950’s vintage. Remember, this is just a guideline… In the end, whatever you like and what works best for YOU is the only thing you should wear.

(Please see below for a nifty Length Chart which serves as a guideline for skirts and dresses!) 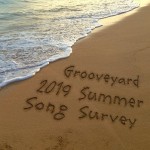 Voting is now open for our annual “Summer Song Survey”.  .  You can pick the best 10 songs of the season, or favorites you remember from a barbeque, pool party, trip to the beach or other summer memories.  Vote and find more details here.