Retro Dee writes about music, fashion and other trends of the 1950s on this site.  Check out her blog, Retro Dee’s Guide to the Best Era Ever here, and her column here every Wednesday.

Hello again, folks! It’s Retro Dee once again and Welcome to the 3rd and final installment of Keeping the 50’s Alive at Christmas!

One of the best things about Christmas is the decorations! In the past couple of years, I started to decorate retro in the 1950’s style. Here are 10 Retro decorating ideas to make your Christmas a Fabulous Fifties Fantasy come true!

1. Tinsel (aka “icicles”):  Last year, I wrote an entry called Tinsel: Life in the ’50s Just Got a Whole Lot Messier. Tinsel was very popular during the 1950’s, and it was common for people to drench their trees in it. Practically every single Christmas tree photo I’ve seen from the 50’s, the tree had a ton of tinsel! Now truth be told, tinsel is a messy pain in the butt. However, it’s worth it to get that true vintage 50’s look. Today’s tinsel is harder to hang and flimsier since it’s made of plastic and not metal, but at least it doesn’t have lead in it. If you’re going for a full-on 50’s look, don’t forget the tinsel. (but be prepared to have it tracked all over the house!)

TIP: When decorating your tree, put the tinsel on LAST. What idiot adds ornaments to the tree after the tinsel is already in place? ME. I DID. Although, it was not entirely my fault. It started off as Jelly Bean’s tree, then I added the tinsel, then later, I bought some retro Christopher Radko Shiny Brites. So I had to add the Shiny Brights last. Hooks love to get caught in tinsel, especially if you’re using cheap tinsel. And cheap hooks, for that matter. You get what you pay for, kids!

2. Reflector Ornaments:  These were invented in the 1940’s and were popular throughout the 50’s. They have made a comeback today and it’s no wonder. They are beautiful! Christopher Radko has designed several styles in collaboration with Shiny Brite. They are more expensive than the $1 you’d pay per box at Woolworths back in the day, but they are so worth it. I bought 3 boxes and I’ve been marveling at their beauty and quality. And the best part? They are spot-on reproductions that look just like the ones from the past.

3. Bubble Lights:  These fun, old-fashioned lights are definite 1950’s throw-backs. They are available to purchase to use as lights on your tree or as a candolier in the window. I got a 9-light candolier and decorated it with some plastic holly and it’s a real retro-lover’s treat. The old folks say it brings back memories and I say I love the retro look.

(Just remember to unplug it after a couple of hours so they don’t overheat!)

4. Elves:  These were also big in the 60’s, but began their popularity in the 50’s. The felt ones are what they call “knee huggers” and were made in Japan. Some have really cute faces, while others are kind of scary! Still others are ceramic and can be found both as reproductions and actual vintage items on places like eBay. I have found that the reproduction and vintage felt elves are affordable if you only want to buy a few. But be forewarned that people really come out of the woodwork on eBay to bid for these things! I finally won an auction for 2 of these little fellas because I was determined to purchase the vintage ones.

TIP: If you prefer the ceramic type of elves, the originals can be quite pricey. But no worries, many companies make ceramic repro elves too, just like the ones from the good ole days. There are even repro elf salt and pepper shakers! It’s up to you which, if any, elves you choose to decorate with. But personally, I think these little guys can really add some vintage character to your displays!

5.  Angels:  While looking at photos from Christmases past, I noticed that folks from yesteryear had a lot of angels in their Holiday decor. Sure, angels have always been a Holiday theme, but I noticed the 50’s ones had a certain kitschy “look” and adding such angels can really make your 50’s display look even more, um, 50’s. I bought a pair of cardboard and plastic dime-store angels online and they add just a touch more of retro to my display.  These are wicked cheap, but they also have something special about them as they harken back to mid-century charm. You might even want to put a good ole fashioned angel a top your tree instead of a star.

6. Cards on Doors & Doorways:  For some reason in the 50’s, folks liked using their Christmas cards to decorate. It was a very novel idea back then, and if you actually receive good ole fashioned paper cards in the mail (rather than e-cards and texts and crap) you too can decorate in the traditional 50’s Holiday Style! I’ve been told by elders that they mostly used to put their Christmas cards around the door frame, but I’ve also seen walls and full doors with cards on them. You can even decorate the tree itself with your cards, like you see in this circa 1950’s ad featuring Bing Crosby and Nancy Olson!

7. Stencils:  Stencil decorations were big in the 1950’s. You can see stencil designs used on stockings, ornaments and even windows back in the day. The window decoration required actual stencil outlines and a can of snow spray. I’m not sure where or if you can get all that these days, because honestly, I haven’t looked for it. At any rate, stencils were popular and novel in those days and the snow-inspired designs will add a touch of vintage to your decor.

8. Tinsel Garland  is basically made from the same stuff as tinsel, only in garland form that you can wrap around your tree. Again, when I look at the photos of Christmas trees from the 1950’s, I frequently see garland. It’s a good off-set to the vertical hanging tinsel. A good mix is if you use gold garland then it won’t blend into the silver of the icicles tinsel. Tinsel garland is easy to find and never really went out of style. So layer it on! 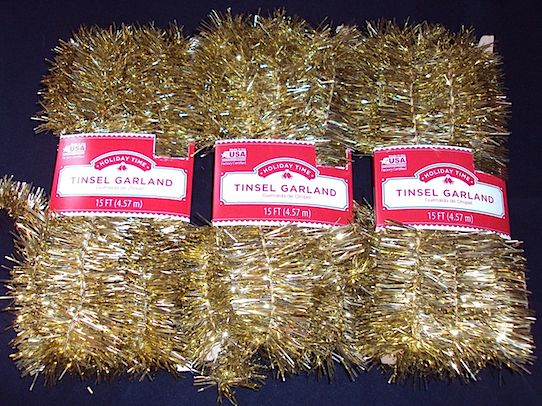 9. Glitter Deer:  There are not a whole lot of these cuties around, and the few times that I have seen them, I didn’t know whether they were 50’s or 60’s. But according to the Vermont Trading Company, glitter deer were “fun, fabulous 1950s-style decorations that you might have seen standing atop the new television set or on the mantel of the electric fireplace, way back when”. That’s good enough for me!

10. Signs:  Yes, I know signs have been part of Holiday decor all along, and this is not just a 1950’s thing. But vintage (or vintage looking) signs from the 50’s will really add to your theme. It will be hard to find a vintage paper and foil sign from the 1950’s that is still in good condition. You might want to just go straight for the reproductions. Folks in the 50’s were very sign-oriented, so even just wishing those around you “Happy Holidays” had that much more meaning when posted on a sign.

While using ornaments that directly pay tribute to the 1950’s isn’t exactly authentic, you can certainly use them to make a great 50’s looking display. Here, I have decorated a very small 18″ tree with large 4.5″ wooden ornaments that I bought at a local gift shop depicting 1950’s style cartoon graphics. I added a pink Cadillac ornament to sit next to it and voila! I have a great little tribute to the Best Era Ever.

Which brings us to…

TIP: One important thing to know about decorating retro is that many retro displays and offerings are dated to the early 1960’s rather than the 1950’s. This is important if you (like me) are interested in only paying tribute to the 1950’s.

But please get one thing right– I’m NOT condemning the 60’s decade. It was wonderful, but just not the personal joy that the 1950s are to me. That’s why for me, decorating with an aluminum tree just won’t get it. If you too, are interested in staying focused on the Fabulous 50’s (and not spilling over into the 60’s) here are some things to AVOID in your Holiday decorating:

(If you didn’t like the first two, wait ’til you see this lil nightmare…) My idea was to get a 2-foot artificial tree and use more reproduction Shiny Brites and the few solid gray cat ornaments I could find to pay tribute to both the 1950’s (Best Era Ever) and my Chelsea (Best Cat Ever). The tree is only 2 feet, but because of the big spaces between the branches, it appeared that I’d be able to fit the bulbs on it. But that was before I realized how much space the cord from the lights was going to take up. Oops…

Unfortunately, not only was the string of lights too bulky for such a delicate tree, the colors were impossible to space apart. So I have all the blues and yellows clumped together with the reds and greens stuck on the other side.

With the reflection of the ornaments and all that neon, it ended up looking like a tribute to Petula Clark’s “Downtown” instead of a tribute to my Chelsea. Plus, the pastel hues I picked for the Shiny Brites don’t exactly match with the bright, primary colors of the lights. Yeah… Did not think that one through. Oh well, it will have to do.

I hope you enjoyed this 3-Part Series of “Keeping the 50’s Alive At Christmas!” Please stay tuned for a special, holiday-themed “Fifties Foto Flashback” which will be posted next week!

Voting has ended in the eighth annual Great 88 listener survey.  Check out this site beginning Monday when we offer the annual “12 Days of Greats” featuring the dozen songs that just missed this year’s survey.  Results will be announced during a special five-hour edition of “The Grooveyard”  on December 28 starting at 7 PM.

Collecting 1950’s: The Case of the Missing Pennant