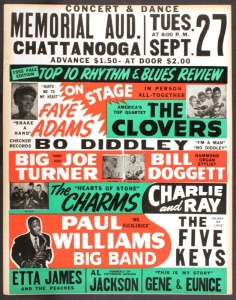 Join Alan Seltzer on “The Grooveyard” Saturday night at 7 PM when we celebrate the anniversary of the start of the “Top 10 R&B Show”.  The national tour started a 60 day national excursion in Norfolk, VA on January 28 1955 and wound up in New York City and Buffalo two months later.

Artists from the tour–including The Clovers, Faye Adams, The Charms, Joe Turner, The Moonglows, Lowell Fulson and the Bill Doggett Trio–will be featured along with other popular R&B artists from the era.

Just one week is left to vote in our annual Love Song Survey  There’s two different polls, one for love songs of the 1950s, and one for love songs from 1960-1963.  Pick 10 favorites from each group of years daily through January 30th at 10 PM.  You can also write in other songs if your choice isn’t listed.  Details are available here.

I Dream of Buddy: A Dream Blog Exclusive

Retro Dee Reveals: My Votes for the 10th Annual Great 88!