Hi everyone and Welcome to another Retro Dee Reveals!

After each song survey countdown, I do a post to reveal what I voted for because… that’s how I roll. This year, however, I made some different choices when voting on this particular survey. I chose the maximum 10 songs in both the 1950’s and 1960’s categories. But that’s not the strange part. What I did this year, is I chose songs I personally find to be the most romantic, from a happiness standpoint. So, instead of just going in and voting for my favorites, I picked the songs about happiness and devotion. I chose to omit songs about loss and longing, and picked only the ones about being happy!

My Picks for the 7th Love Song Survey

Now folks, let me just say. Out of all The Grooveyard surveys I’ve voted in, the results of this one surprised me the most. This was truly a “shock” especially when we get to the Top 10. But that’s what’s fun about voting in song surveys. You just never know what’s gonna come over those airwaves…

Coming in at Number 50 is “Destination Love” – Bobby Curtola (1963): What better song for a love song survey? Whose destination isn’t love? Believe it or not, this is the ONLY song I correctly predicted. For some reason, I was just feeling it at Number 50 and voila!

Number 46 “For Your Precious Love” – Jerry Butler and the Impressions (1958): Ha, ha, okay you’re gonna love this one. I was thinking of a different song when I voted for this. The song I thought I was voting for is actually “For Your Love” by Ed Townsend. Whoops! But Jerry Butler is good too.

Number 36 “Whispering Bells” – The Del Vikings (1957): I cheated on my requirements just a TAD by voting for this song. They’re singing about the bells bringing his baby back to him (I guess she left). But I still think it’s a happy song because it conjures up visions of dating in the 50’s. I can picture this song playing on the radio of a ’56 Chevy Bel Air on date night better than I can imagine any other song. It just puts you in the moment.

Number 33 “Ten Commandments of Love” – Harvey and The Moonglows (1958): I chose this song as a dedication to my beloved Great Aunt Helen who passed away last October. Auntie was young back in the 50’s and remembered every song from that era. One day we were listening to the jukebox at my cousin’s house and “Ten Commandments” came on. This was before I became a fan of oldies, and I couldn’t help but giggle during the spoken lines. Auntie said with a smile: “Oooh, silly. RIGHT?” She knew times had changed since the 50’s, but the nostalgia was still there, you could see it in her eyes. And I have Auntie to thank for so many of my own wonderful memories.

Number 28 “Devoted To You” – The Everly Brothers (1958): “I’ll never hurt you / I’ll never lie/ I’ll never be untrue…” if you can believe that, you’ll believe anything! But the two boys who sing it don’t make it any easier to walk away from. Phil really hits the high notes on this one. It’s a bit more unique than some of their other ballads, but no less romantic.

Number 26 “There’s A Moon Out Tonight” – The Capris (1961): This is kind of a typical song of its era, but maybe that’s what’s good about it. If something is good, typical is just fine.

Number 24 “Til I Kissed You” – The Everly Brothers (1959): “I never knew what I missed til I kissed you/ How did I exist til I kissed you?” Those lyrics kinda remind me of that song Greg Brady sang in the episode where he got busted for smoking… But the lyrics aren’t why I like this song. It’s more a case of the brothers’ impeccable harmonization and a really fun, upbeat music arrangement. Those drums are just a hoot. You can’t help but be happy when you hear this song!

Number 22 “I Want You I Love You I Need You” – Elvis Presley (1956): Aww, Elvis, that is so sweet! This is quintessential Romantic Elvis and a definite must-have on an oldies Love Song countdown. 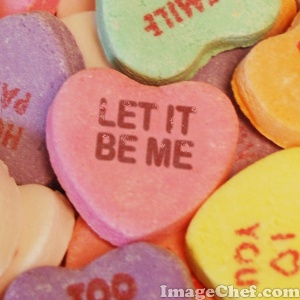 Number 21 “Let It Be Me” – The Everly Brothers (1960): The brothers Everly return for a 3rd song because they’re so cute. Uh, I mean, talented. I’ve said it before, this is the only version of “Let It Be Me” that I like. It’s just so incredibly beautiful when Don and Phil sing it. But then again, what isn’t?

Number 19 “Hey Baby” – Bruce Chanel (1962): I love this song, it’s so happy and upbeat. I think Buddy Holly would have sung it better, but since he was gone, Bruce Chanel does a fine job. This is the kind of song that reminds you of walking down a pier with someone special on a sunny day. It’s just that happy.

Number 18 is another song by The Moonglows called “Sincerely” (1955). And it’s sincerely romantic! Those Moonglows really knew how to do a good love song. Right?!

Number 17 “Poetry In Motion” – Johnny Tillotson (1960): I love this song! It starts off real slow, then picks up into a fun, upbeat tune. I never recognize it from the beginning. It gets me every time! The whole song’s got that Malt Shop Era sound that I wish never died out.

Number 16 “Can’t Help Falling In Love” – Elvis Presley (1962): The lyrics to this are so romantic, although I don’t particularly care for the musical arrangement. It sounds like a cat meowing. But I guess it’s okay because I love cats.

Number 9 “Little Star” – The Elegants (1958): A beautiful song in both lyrics and melody, “Little Star” is based off of the children’s song “Twinkle Twinkle Little Star”. It’s an ingenious adaptation that defines the romantic era of the 1950’s. Also, D.J. Alan Seltzer named his parakeet after this song. Now that’s cute.

Number 8 “True Love Ways” – Buddy Holly (released in 1960): This is without a doubt, the most romantic song of all time. Not only did Buddy Holly write it for his beautiful wife, Maria Eléna, the song itself is just so beautiful. The words are hauntingly sentimental (considering Buddy’s untimely death) and even though he did not write the melody, he sings it as if it were made for someone of his inimitable talent. The vocals are perfection; his voice is like crystal. “True Love Ways” is a true classic that stands the test of time. Is it my favorite Buddy Holly song? Well, no. It’s not. But it sure is pretty.

Number 4 “To The Aisle” – The Five Satins (1957): This song by the Five Satins might be less popular than their hit “In The Still Of The Night”, but it’s just as romantic. And it made it all the way to Number 4 this year on the countdown to prove it!

Number 2 “Everyday” – Buddy Holly (1957): I voted for this song not just because it’s Buddy Holly, but because I think this song really encapsulates the innocence and romance of the 1950’s. What I didn’t think was that it would make it ALLL the way to NUMBER TWO! After all, it only made it to Number 20 last year. To see it jump 18 spots? I was stunned. As we got to the end of the countdown, I noticed we hadn’t heard “Everyday” yet. I joked, “Well, it either didn’t make it, or it’s Number 2.” Then what do you know, surprise! I really didn’t think it made it this time. Wow, wow, wow. It even beat out Buddy’s other song, “True Love Ways”. As fantastic as this song is, I just was not expecting it!

Since “Everyday” made it to Number 2, I’d like to tell you what Number One is… but I can’t, because I didn’t vote for it. You’ll just have to check out the survey list on The Grooveyard to see. But before (or after) you do that, there’s more coming your way from Retro Dee’s behind the scenes voting, right after the little cowgirl…

Songs Did I Not Vote for (and why)

We’re back. And now as a devoted fan of Buddy Holly and The Everlys, I must explain why I didn’t vote for all their songs on the survey. Well, actually, no, I don’t have to explain. I just want to.

Like I said in the intro, this year I decided to only vote for HAPPY, romantic songs- ones that celebrate the joy of love. Some of those songs didn’t fit that criteria. That does NOT mean I don’t like them, it just means I voted differently this time!

The songs I left out were:

“Peggy Sue” (1957) – The opening line says: “If you knew Peggy Sue / Then you’d know why I feel blue…” Already we know it’s not the best situation. Despite not being the leader of the happiest romantic songs of all time, it’s still one of my favorites.

“That’ll Be The Day” (1957) – Bottom line of the entire song is “If you leave me, I’ll die… and you know it.” Which in my humble opinion is just a tad too manipulative to be truly romantic. But the good news is that it’s proof that the Best Song Ever Made doesn’t need to be a drippy, romantic one! And it’s fairly clear that this is the best song ever made.

By The Everly Brothers:

“Bye Bye Love” (1957) – As I’ve said, I only voted for happy songs this year. This might have an upbeat sound, but the lyrics are definitely blue. “I think I’m gonna die / Bye Bye, my love, bye bye” Wow, that’s intense.

“Cathy’s Clown” (1960) – This song is about taking back your pride, not romance. In part, that’s actually what makes it so cool. The other part of what makes this song so cool is just about everything else!

“When Will I Be Loved?” (1961) – According to the title and lyrics, there seem to be some major issues with the singer of this song. But in reality, it’s just a song. See, ironically, “When Will I Be Loved” was written by Phil Everly, who was quite possibly one of the most popular human beings to ever walk the Earth. It must have been a real challenge for an international heartthrob like Phil to write a song about rejection. Who didn’t love Phil Everly? He was as talented as he was good looking. And then some. All that and a bag of chips, you could say. I mean, I could go on and on: he was HOT! But back to the song. What’s also ironic, is that I really like this song, but I couldn’t vote for it because I was only going for the upbeat.

Well, that’s all. I hope you like my picks and explanations, and even if you don’t, thanks a bunch for reading!

Check out the full countdown HERE on The Grooveyard… where Oldies come alive!

Join us for the Greatest Hits and Forgotten Favorites on…